The historical Vindel Parchment, the jewel of Galician secular music where Martin Codax’s cantigas de amigo are collected, returns to its hometown Vigo, after 700 years! The thirteenth-century manuscript will remain in Vigo’s Museo do Mar until March 2018.

Cristina Pato has been invited by the University of Vigo to produce a show celebrating this historical occasion. “The Vindel Parchment: A Musical Journey” will be held in December with a format that combines music and conversation with experts on the historical document, the concert will include seven arrangements of the original songs made by renowned Galician artists from styles such as jazz, early, modern and traditional music.

The Vindel Parchment: A Musical Journey will take place on december 19 at the Teatro Afundación in Vigo. 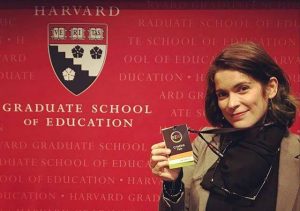 In other news, on October 13th and 14th Cristina was honored to represent the Silkroad in the celebration of Harvard’s Project Zero 50th Anniversary, with Howard Gardner, David Perkins and Steve Seidel.