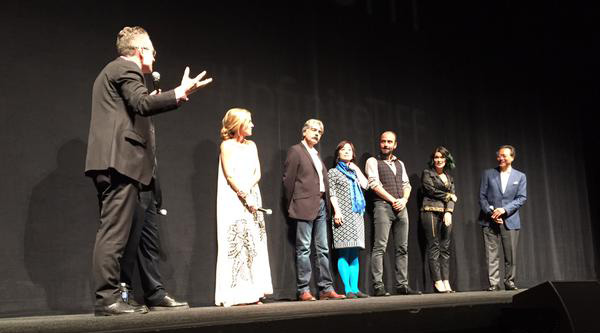 The Music of Strangers: Yo-Yo Ma and The Silk Road Ensemble, the new documentary by Oscar-winning director Morgan Neville, was premiered on Sunday, September 14th at the Toronto International Film Festival. The film was received with a huge standing ovation.

Below you can find some pictures from the premiere, as well as a short clip from the movie.

UPDATE: The Music of Strangers: Yo-Yo Ma and The Silk Road Ensemble is slated for a Spring 2016 theatrical release, followed by a HBO premiere, and is already getting some great reviews. Here are some excerpts:

A first-rate music film capturing a restless desire to communicate beyond the boundaries of any single idiom, The Music of Strangers watches as Yo-Yo Ma, a giant in the world of Western classical music, puts Bach and Beethoven aside to spend time with his multicultural Silk Road Ensemble. (…) We meet Wu Man, master of the Chinese stringed instrument called the pipa; Damascus-born clarinetist Kinan Azmeh; Iranian exile Kayhan Kalhor, who plays the bowed kamancheh; and the ebullient bagpiper Cristina Pato, “the Jimi Hendrix of Galicia.”

Music is a powerful medium with the ability to unite people from even the most disparate socio-political backgrounds, ideologies and countries. That’s the underlying message in 20 Feet from Stardom director Morgan Neville’s latest feature, The Music of Strangers: Yo-Yo Ma and the Silk Road Ensemble, a documentary that examines the multi-generational, multi-ethnic musical supergroup he created that took shape in the aftermath of 9/11, and how their music and positive message continues to shape the world around them.

What makes “The Music of Strangers” so fun to watch, however, and which tempers the seriousness of its subjects, is the diverse range of performance footage at play. Some of it is archival, much of it is beautifully staged across multiple countries and environments. Neville is keenly aware of how to show the musicians’ kinetic energy onscreen, and he relies on this talent to keep the film consistently alive and moving.